If you find the following hard to believe, try to imagine yourself in my position.

I was shopping for a pair of noise cancelling headphones, maybe something I could use for gaming, I thought.

I've got neighbours who like to karaoke themselves to their neighbours, no actual singing, just repeating what they hear, kinda annoying.

I thought noise cancellation would work for that too. 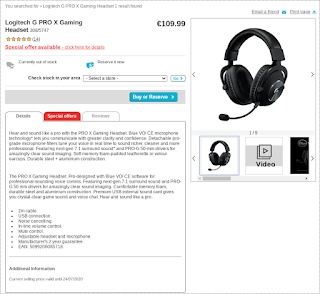 Well it says noise cancelling in the description, so I proceeded with the purchase.

I left it a few days before trying them out.

Some noise cancelling headsets have it enabled by default, some have a button to turn it on and off, some require you download an app.

I thought it curious that it didn't state "noise cancelling" on the box, but then there are probably lots of things the headset does that aren't described on the box.

Like that you need to download an app, available in Windows and Apple versions, to configure the headset.

And a link to the documentation where the headset is described as having "passive noise cancellation".

In case you haven't heard that term before (I didn't), it means that the headset operates like a pair of ear-muffs, or a pillow, or a wall. They make ambient noise less loud by being a barrier to outside sounds.

I wanted something that actually cancelled the noise, not just make it weaker, you know, like
https://en.wikipedia.org/wiki/Noise-cancelling_headphones

So I phone up Argos customer support where I talk to a Stephen Miller.

We talk and while doing so I get an email from Argos, listing the noise cancelling headsets they have available, the Logitech ones I bought were not in the list.

If you go to argos.ie and search for "SHOP NOISE CANCELLING HEADPHONES" you will see for yourself.

I asked Stephen to send me an email, which he did.

So just as mentioned on the phone if you take your headset back to a store with you receipt we can exchange for you for a different make or model due to the issue with them, you are also more than welcome to reserve one just in case there is one that you are happy with that we could give you on the same day.
Whatever it is you would like to get or do we should be able to meet your demands within that particular visit.

I asked him if there was a reference number for our conversation which I had been told may be recorded for training purposes, he said they didn't have one.

I asked how they referred to recorded conversations internally, he didn't seem to know.

I half-joked that I didn't want to end up leaving the shop with two sets of headphones, which he assured me wouldn't happen.

I got there and provided the receipt. Told the Argos sales representative about my phone conversation and the email.

"Do you have a reference number for the conversation?" she asked.

I was dumb-founded. Stepthen Miller specifically stated that they don't provide reference numbers for phone conversations.

I asked if she could get the phone reference number, she said she could not.

I mentioned the email Stephen Miller sent me, she asked to see it.

I said I don't send emails from my phone.

I asked if she could look up the email from their end, she said she could not.

She said she couldn't look that up.

She retreated to consult with two other representatives when I noticed one of them take the headphones out of the box to try them on!

With glee and an actual kind of half-jig she triumphantly announced that they were indeed noise cancelling.

Talk about being on the wrong side of a victory dance. I searched around a bit, found and picked up my jaw and tried to explain what noise cancelling meant.

My efforts fell on deaf ears.

I asked if getting customer support on my phone would help.

I was told that it could.

It took a while but I got to talk to another customer service representative.

I asked about Stephen Miller, the person I was talking to (Becky? - not sure, I'm sure there's a log somewhere, right, RIGHT?) said she didn't recognize the name! WTF!?!

I got the manager in the store to talk to the customer representative and they ended up disagreeing.

The manager, sure that these were noise cancelling, and that I had put them on my head, meant that they couldn't be re-sold, meaning that I was not entitled to a refund or exchange, something Becky (I'm so sorry if I got your name wrong) disagreed with.

I took this encounter as round one and left.

I came back 10 seconds later to buy the headphones I wanted as I had already reserved them.

As I write this they are no longer listed on argos.ie but are on amazon.co.uk, with a downloadable manual to boot.
https://www.amazon.co.uk/JBL-Bluetooth-Headphones-Cancelling-Microphone-Black-Matte/dp/B0765Z1NWV

They have a noise cancelling button, and a light to let you know when it's on!

I wrote to Stephen Miller <Stephen.Miller@argos.co.uk> but as of the time of writing this I haven't received a response.

Either the customer service representative (Becky?) I talked to was new, Argos have more than one customer service department, or Stephen Miller is a one-time-use name Argos uses to send customers down the rabbit hole so they hang up thinking they've made progress on getting a refund/exchange.

About those JBL headphones, I may have discovered why they were taken off the argos.ie website.

I didn't want wireless headphones because no matter how good the battery, it won't last.

At least, I thought, if I keep them plugged into a charger I won't drain the battery.

It says in the manual that to turn on noise cancelling while plugged into the charger, hold down the anc (Active Noise Cancelling button) down for two seconds.

I tried it. Nothing happened.

The one reason I bought them is at fault.

I intend to take Argos to the small claims court and to that end I handed a letter giving them 10 business days notice, giving them a chance to change their mind. So Firday 14th of August, see you in court.

So before the court date, I got an email letting me know Argos weren't going to show up, so claim paid in full.
Posted by Philip Ashmore at 04:14